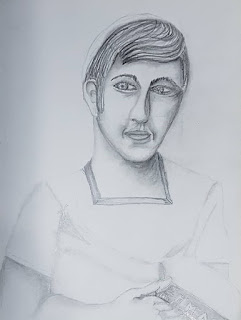 I have not been regular with my blog posts for The 100 Day Project.  I started this project on 7 April, 2020.  We were still in isolation due to COVID-19.  Being unable to go anywhere and stuck inside most of the day, I had a lot of time to complete a drawing  working 2 hours per day, taking over 2 days or a painting over 3-4 days.
I started this project to draw or paint portraits of people who had influenced my life. As I began to post in my Instagram and on Facebook, I realised that people were interested in the stories behind all portraits I was drawing and painting. So, I started this blog to tell those stories.   It is now day 45/100 so I have a lot of catching up to do with blogging the stories about the journey this project has taken me on.
This story is about the love of my life, my husband Richard.  Dick is the nickname he was given when he served in the Australian Navy.  I drew this of Richard on our anniversary, 16 April, 2020.  We have been married for 37 years.  I met Richard when he was stationed in the USA for 3 years. Richard was in the Australian Navy, but was in the USA doing course work to train for work on the US built ship, the HMAS Sydney.  The HMAS Sydney was built in the Seattle Washington, at the Todd ship yard. While waiting for the ship to be commissioned, Richard was stationed in the Virginia Beach, VA area. I met him 1 month after he came to the USA.   I was living with my parents and Richard often visited my family in Virginia Beach, VA.   We married just before the HMAS Sydney was commissioned and sailed to it's home harbour, Sydney Australia.
I moved to Australia before Richard's ship arrived in Sydney.  It took about 6 weeks for the HMAS Sydney to arrive in Sydney, NSW Australia.  I stayed with his parents while waiting for Richard to arrive in Sydney.  While staying with Richard's parents, I got use to a different culture and started to learn about my new home in Australia.  Richard's parents were such kind lovely people and taking me in for 6 weeks was so nice of them.  I remember seeing a photograph of Richard in his parents house and always admired the photo.  I thought he was so handsome in his uniform.  This photograph was given to me by his father after Richard's mother died.  It hangs in our bedroom.
The drawing is based on this photograph of Richard.  He was 17 when the photograph was taken of him.  I met him when he was 20.